I realize I'm getting a bit behind on blog posts, and I know I still owe many of you a breakdown of how I made the spreadsheets that I mentioned in my Vegas presentation this year! However, after an unplanned wild two weeks of trading that took up most of my time and energy, I decided that a post about my losses was a much higher priority.

Before we get into some of the specific mistakes I made with LAKE, we need to examine the underlying problem. This underlying problem was present in my trading all summer, ever since I started transitioning over to listed stocks. What was this problem? My unwillingness to cut losses when I shorted momentum runners too early. Just take a look at these two tweets of mine from July:

As far back as July, I knew that I was playing with fire. I even went so far as to predict that my stubbornness would badly burn me eventually. Yet despite knowing this, I refused to make a change. I'm not sure whether it was due to pride, fear of exiting at the top of a spike, or perhaps just the thrill of turning a loser into a winner. Whatever it was, the problem only got worse. Here are a couple of trades from my profitly that don't look too bad on paper, but there was far more to the story: 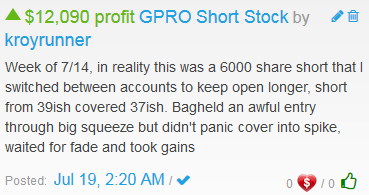 While on paper this looks like a solid GPRO gain, the reality is that at one point I was down over $50,000 on the trade.

Similar to GPRO, this RADA loss doesn't look like anything too unusual. However, the reality is that at one point I was down over $90,000 on this trade.

These are just two examples, but I know there were far more uncomfortable situations that I held through. In fact, RADA might have been one of the only ones that didn't turn out to be a profit for me. While in the back of my mind I kept thinking, "Eventually this won't work out," my bad habit kept being rewarded with narrow escapes and sometimes even solid profits. I knew my trading style was broken, but the results never showed it. In fact, I was even rewarded with my most profitable trading month ever in September! I continued to play larger and larger as the gains poured in, refusing to address the underlying issue. Then LAKE came along, and the wheels came off.

My LAKE trade started off well enough; I had shorted 10,000 shares at about a $9.90 average, and I was pleased with the price action. It appeared to be fading, and I believed I would be able to cover in the low $9s or high $8s. Below, you can see the complete intraday chart: 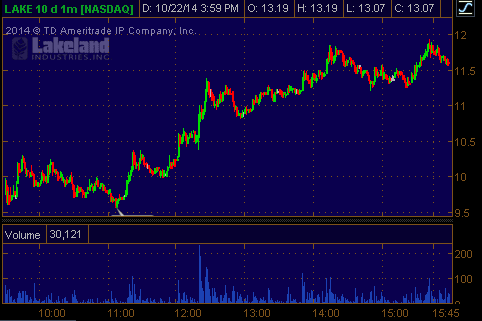 As I was watching LAKE attempt to crack the low of the day, I was feeling VERY good about my short. I was already up over $3000; it was just a question of when to take profits. Then, a press release came out. I don't remember the specifics. All I remember is that very quickly my $3000+ gain was back to break-even. This upset me - I wanted those profits! I also didn't want to cover into the top of a spike, I was hoping that the spike would quickly top out and we'd get back to the weak price action that I had just seen. However, as the day wore on, it became clear that LAKE was not going to slow down. My one-time profitable position was now down badly, so I figured I'd just go for a ride, like I had so many times before the last few months. I could always average up, and how bad could it get? At the close of the day, I was down roughly $16,000 unrealized.

The next morning LAKE was gapping up, and although I was annoyed, I welcomed the chance to add more size higher and get my average up. I knew I had gotten stubborn with my original position. When adding to a loser, I always tell myself not to get stubborn with the adds too. For whatever reason, I failed to heed my own advice in this case. 30 minutes into the day, I was already trying to average up into the spike to $13. There was a brief pullback, but then the stock ripped right back. I now had 20,000 shares from an $11.50ish average, and I failed to downsize when my mid-$13s risk level broke: 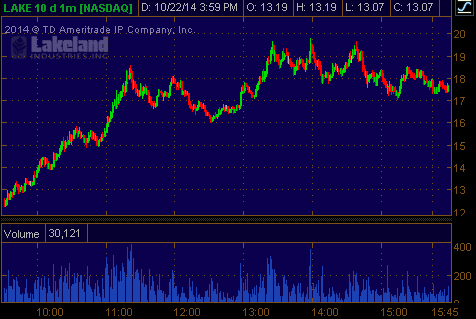 At this point, I was getting uncomfortable; but I still had room to add, and I was going to use it! I just had to be more careful. LAKE started to look heavy to me as the $16 area topped, so I threw in another add. This time, I believe it was roughly 20,000 shares in the high $15s, bringing my total position to 40,000 shares. LAKE tested $15 a few times, and I kept waiting and praying for it to break down, yet the snap never came. After holding $15 for a second time, LAKE ripped through the $16 resistance area, which I AGAIN failed to cover into. Suddenly, the stock was over $18, and I was sitting on my worst unrealized loss ever.

A couple of hours of consolidation later, and I still had all my shares. LAKE had pulled back to $16, but it had failed to break down any further. I could have downsized into this pullback, but I remained stubborn. I wanted a bigger move so that my damage would be less! I was thinking about my money, not about what the chart was telling me. When LAKE perked back through $17, that's when I began to get scared. I realized how out of control the loss could get if I stayed stubborn and LAKE kept ripping into the afternoon. So I took off all my adds into the strength, somewhere around $18. Once the adds were covered, the damage JUST from the adds was roughly $100,000. I was left sitting with my 10,000 shares from $9.90, which was still down another unrealized $80,000. I had opened myself up to losses I had never experienced before because of the massive size I forced myself to play to try to fix a bad situation.

While financially this wasn't crippling to my account, it was mentally disastrous for me. Taking the size off did allow me to attack again the next morning, and I was bound and determined to NAIL it with size to make back my losses, and then some: 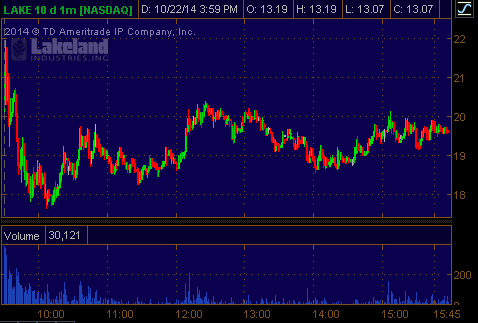 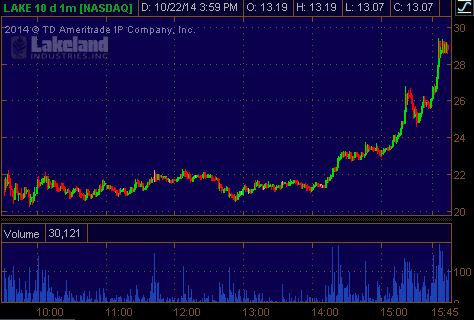 All morning I fought the stock with large positions, making emotional shorts into weakness and covers into strength. I probably was playing 20,000-30,000 share positions at a time, all the while still holding my original 10,000 shares from $9.90. Mentally, I was toast. I had gotten so far away from my typical trading that what I was doing now was hardly recognizable. The results showed that, I tacked on an additional $75,000+ in losses. The one silver lining in all of this was that I cut ALL of my losses once LAKE began to break out past $22.50ish. Had I held through this spike, my losses would have probably doubled. However, the damage was done. My $9.90 position became a realized $120,000 loss.

The next day, LAKE finally had a meaningful pullback. But at this point I was so mentally defeated and exhausted, I think I only played 5000 shares and made a couple dollars per share on the trade. The end result of all of my LAKE trading came out to $290,000 in damage:

For all of the times my stubborn trades had worked out, LAKE gave all those profits back, and then some. The amazing thing about trading is that you can be right (or get lucky) 99 times out of 100, but it only takes that one time to wipe you out. Staying stubborn in losses is the easiest way to open yourself up to a HUGE level of risk, and I must force myself into discipline to make sure this NEVER happens again. Protecting your account is far more important that avoiding a small loss for the sake of your pride.

My stubbornness affected me elsewhere too. I was trading size on other positions, in setups I normally wouldn't even play. I lost just under $40,000 on an impulsive SIMH long (which I failed to cut the loss quickly on), and after making back some of my losses on a well-timed short on VSR, I gave back all of the gains on yet another stubborn loss on IBIO.

October will go down in the books as my first losing month since I started trading full time, and I FULLY deserve it. While I could stick around and battle the next two weeks, I must not lose sight of the big picture. 2014 has been an INCREDIBLE year for me so far, and even after this month of losses I am still up over one million dollars for the year. To push for a break-even or better month when I know I'm not mentally right would do nothing more than put more of those gains in jeopardy, and I refuse to do that. So I will take a much needed break from trading, my first vacation in quite awhile, and I will come back refreshed in November for a fresh start!